The full-version releases that include more test coverage and major changes with several improvements & code optimizations will be coming up in the multiple scheduled major releases. The details can be found here.

The idx-auto-tester is open for the community to contribute. Read the contribution guidelines [here].(CONTRIBUTING.md)

The Standard Authentication functionality, which is available with LoginRadius Identity Experience Framework, can be tested using these automated scripts. By running these automation scripts, you can ensure your implementation. The automation scripts will be continuously improved by adding more test cases whenever any new functionality is introduced in the LoginRadius Identity Experience Framework.

Don't have Loginradius App ?. Create your own here

Now you are able to run scripts on your implementation of Loginradius Identity Experience.

Nightwatch includes a command-line test runner, which makes it easy to run tests and generate useful output. Please refer to the Installation section for details on how to get the runner installed. There are a few different options on how to use the test runner, depending on your installation type.

The Test Case can also be run in parallel, as the test files will be triggered at once. Each test file will fill a test worker slot. Individual tests/steps in a test file will not run concurrently.

The more details on parallel run can be found here.

Search for --headless-none in nightwatch.json and replace it by headless like below code:

A headless browser is a web browser without a graphical user interface. Headless browsers provide automated control of a web page in an environment similar to popular web browsers, but are executed via a command-line interface or using network communication.

Currently, Test Cases are scripted to run with only Required Email Verification Flow.

The process of automation framework implementation or creation is defined here. You can refer to it for creating and updating the test cases with different scenarios. 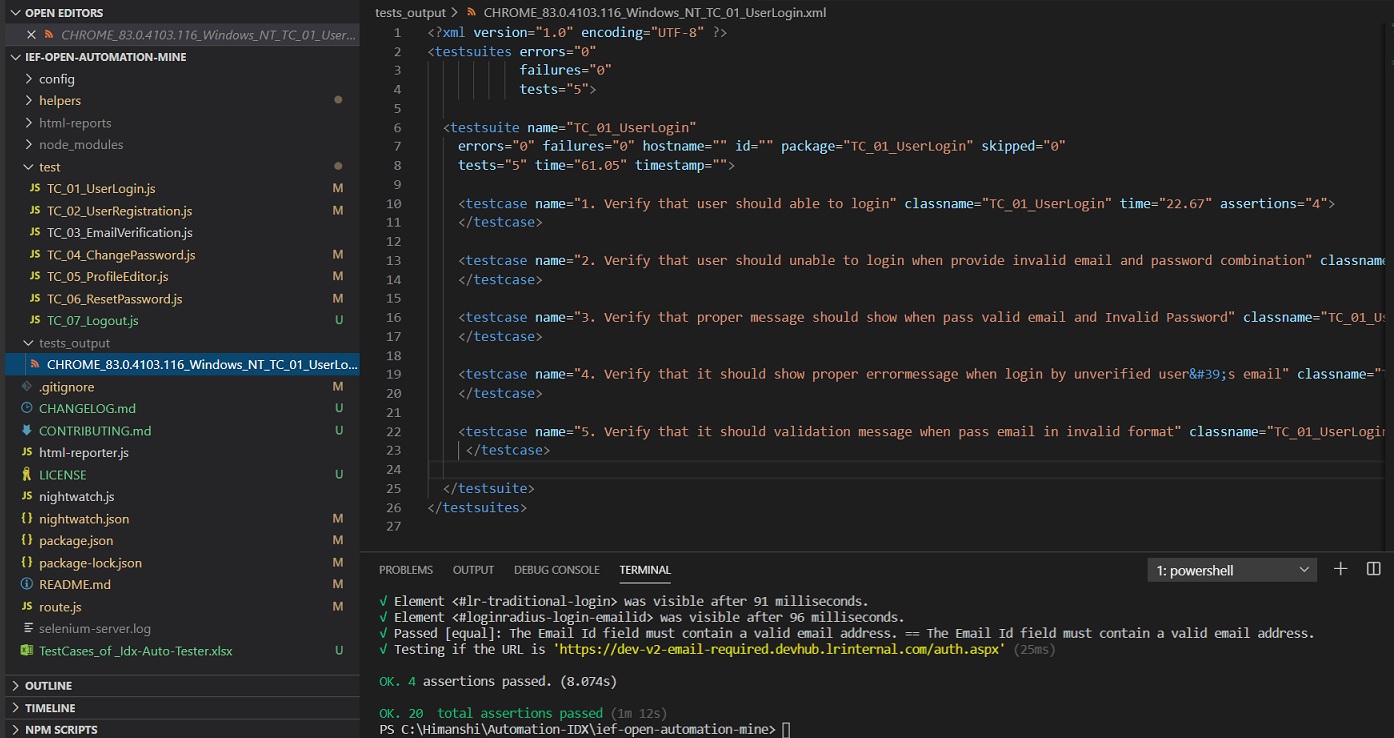 If you'd like to define your reporter in addition to the built-in ones, you can follow the detailed guide here.

Know more about its features and benefits:

With ready and tested automated scripts, you can quickly test the authentication features and workflows implemented using the LoginRadius Identity Experience Framework.

It covers following features and benefits:

Mining the test cases by reviewing code is difficult, so we have extended support to deliver the written Test Cases with the expected outcomes as well.

We have used Nightwatch.js end-to-end testing framework to create the Idx-Auto-Tester tool, which comes with the following benefits:

The test results can directly be read from the terminal and also stored at a specified output folder.

Reports can be defined in supporting means-:

With very effective documentation (readme, descriptive comments to test cases, commands) it is very easy to use by even a non-technical person.

The tool is open for the community to contribute with the pull request process and standards defined by LoginRadius here.