Getting Started with gRPC - Part 1 Concepts

This blog is part 1 of a series on gRPC. Part 1 will go over some important concepts, part 2 will be a walkthrough of a client-server implementation in Go, and…

This blog is part 1 of a series on gRPC. Part 1 will go over some important concepts, part 2 will be a walkthrough of a client-server implementation in Go, and part 3 will be about LoginRadius' experience migrating to gRPC!

gRPC, simply put, is just another way to send data across networks. It can be used to communicate between services in a microservice architecture, where a single service can interact with multiple others. Similarly, in client-server models, there can be multiple clients communicating with a common backend server. 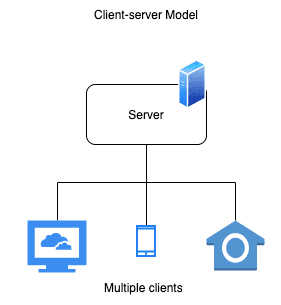 The gRPC framework was initially developed at Google and is now open-source. It is a modern implementation of the RPC (Remote Procedure Call) protocol, which has been around since the 80s. You will often see gRPC being compared to other technologies like SOAP, REST, and GraphQL.

How is it used to send data?

gRPC is based on the idea of calling a remote procedure just like a local one. A procedure is like a function or a method. So, ideally developers can treat remote and local calls similarly. A great thing about gRPC is that developers do not need to know the details of the remote interaction.

Here is a diagram from the official grpc docs showing the flow:

Each client service will include a stub, which is like an interface containing the available remote procedures. These stubs are auto-generated files.

But what does proto refer to? And what are stubs? How can we generate them?

To answer these questions, we need to look at another technology called protocol buffers.

Protocol buffers (protobufs), are a way to format data for storage and transport. gRPC uses protobufs to format data sent over the wire. It is comparable to other data serialization formats such as JSON, XML, and YAML.

How is it used with gRPC?

Step 3: Use stubs in server and clients. 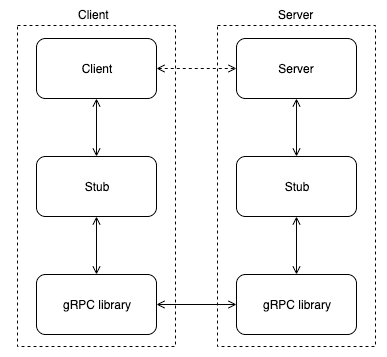 How does it differ from REST?

Here, we briefly go over a few other things to consider with gRPC. These will be covered in more detail in another blog.

Management of proto files
If you plan to have multiple proto files and client services, you need some way to manage them for distribution and version control. One solution is to keep all proto files in a central git repository, and maintain versions using git tags.

That's it for now! To learn more, check out the official gRPC and protobuf docs.

Software Developer at LoginRadius with an interest in big data and basketball..