Learn how to use Twitter APIs using Tweepy, a python package,

As we all know, Twitter is one of the most preferred microblogging websites when it comes to putting your thoughts on the internet. Big organizations use this platform for advertising their product; government institutions even use it to provide prompt customer resolution; various groups use Twitter to run social awareness campaigns and media campaigns. Twitter has close to 330 million monthly active users worldwide, out of which 17 million hits are generated from India itself along with more than 1 billion downloads on Play Store. With all this in mind, Twitter allows access to Twitter API to developers to create some cool applications like bots, automation tools, etc. This Twitter API gives developers access to almost all of Twitter's functionalities like likes, retweets, tweets, etc. Tweepy, a python package, helps us in achieving all this.

Tweepy is a python package that smoothly and transparently accesses Twitter's endpoints made available for the developers. Without Tweepy, the user would have to take care of various low-level details about HTTP requests, rate limiting, authentication, serialization, etc. Tweepy handles all this mess on behalf of the user making the application prone to errors. In simple words, Tweepy is an open-source python package that provides a way for developers to communicate with the Twitter API. But keep in mind that Twitter levies a rate limit on the number of requests made to the Twitter API. To be precise, 900 requests/15 minutes are allowed; Twitter feeds anything above that an error.

Tweepy can be installed by using Python package manager pip. A simple demonstration can be seen below: 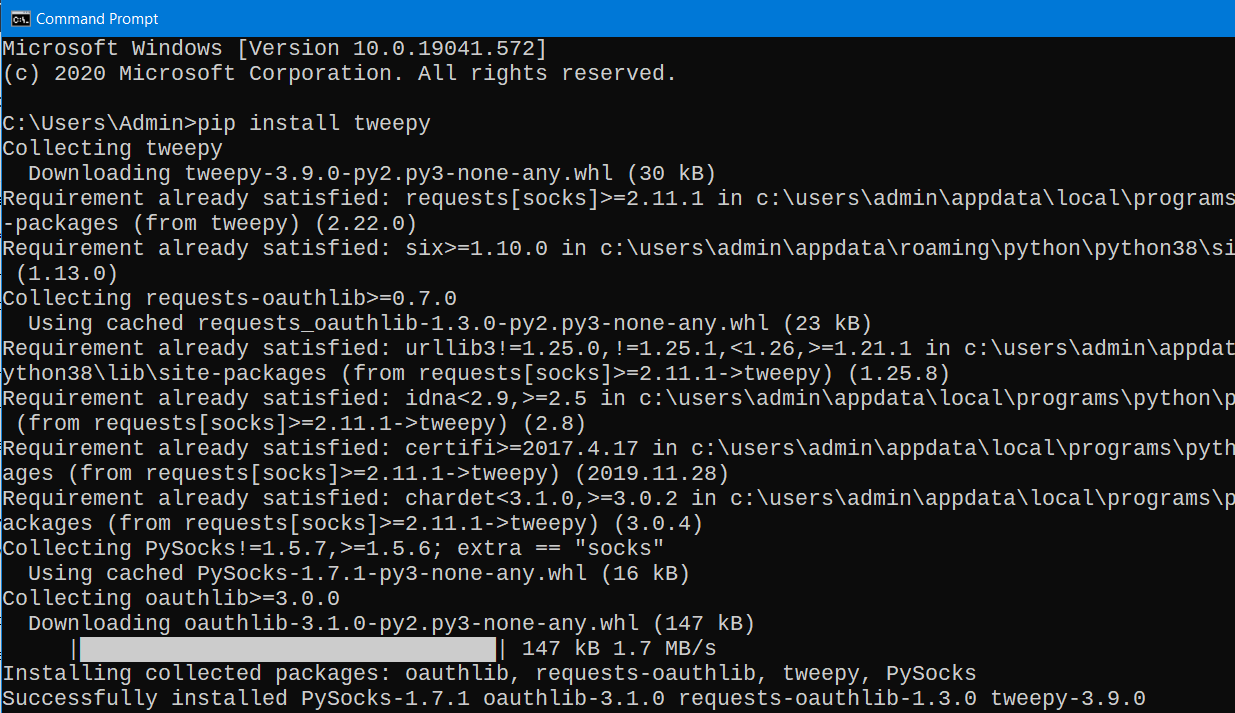 Installation on Linux and macOS should follow similar steps as well.

This is what the account looks like. Here you will get detailed information about the total no. of requests made, your API credentials, and much more information. After creating an account, you need to create an app wherein you will be asked to name your app and a short description. You must be wondering what an app is? The app is like a gateway that contains a set of permissions and keys used to access the Twitter API. An app is needed for accessing the Twitter API as a part of Twitter's OAuth authentication. After creating an app, generate new authentication tokens for authorization purposes.

There are four common basic steps in any Tweepy application.

Note: Use your credentials in the hidden keys above._

Objects created from the Tweepy. API class helps us access most of Twitter's available functionality like tweets, retweets, likes, etc. In the code snippet, we used the api.get_user method for getting information about a certain user on Twitter. Likewise, there can be several use cases of different methods(discussed below) made available by Twitter to developers. You can find the link for this code here.

Now we will see different methods provided by Twitter. The API methods have been divided into groups based on their functionality. The detailed guide for the API methods can be found at the official API Reference documentation.

These methods handles the tweets, retweets, statuses on your/someone else's timeline as long as the account is public.

api.home_timeline() is an API method that returns the 20 most recent tweets on the user's timeline.

api.update_status() is an API method used to create a tweet on the user's timeline. For each update request, it will check the user's recent tweets. If any duplication is found, the request will be blocked by Twitter as a user cannot post the same tweet more than once.

These methods help to find the user details using various paramaeter like name, location, description,friends, followers,etc. as long as the account is public.

We have used get_user() previously to fetch user details of specific accounts.

Likes or unlikes(if already liked) the status specified in the ID parameter as the authenticating user.

Used to block, unblock, list blocked accounts of the user.

createblock() will block the specific user using the id/screenname provided.

These methods help the user to search specific tweet based upon the search query and parameters provided. But not all tweets will be indexed or made available through the search methods.

search() will look out for all the tweets available for the query keyword 'q' provided.

It returns the trends going on at a specific geographical location.

trends_place() will show trends in the specific area. Here one stands for worldwide.

It returns the geographical location like latitude, the longitude of the place id provided.

Tweepy allows the user to concentrate on the application's logic by hiding many low-level details, thus making the application bug-free. You can use tweepy to do some cool projects like bots, automation, machine learning applications, etc.

More information about tweepy can be found at docs. Make sure to look at the official documentation as it will provide you with a greater picture of the package. So what are you waiting for? Go ahead, use your imagination, and get started with the side-project you've always been thinking of.