Exceptions and Exception Handling in C#

C# and the .NET CLR use exceptions to show that an error condition has arisen during program execution. C# programs are under constant threat of running into…

C# and the .NET CLR use exceptions to show that an error condition has arisen during program execution. C# programs are under constant threat of running into some sort of problem. As a program’s complexity grows, the probability that something odd would happen during its execution also gets higher.

The errors which we are getting at the run time of the application is called an exception.

Every time when we are developing an application and it got successfully build without any errors. Then this happens 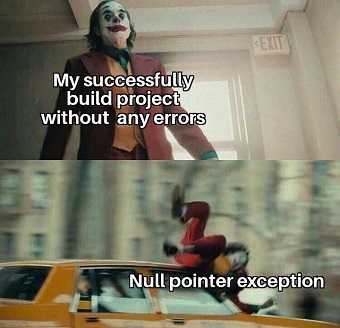 For that, it is good practice to use exception handling.

Below are the common .NET exceptions which we can see on a regular basis of coding.

System.NullReferenceException – Occurs when calling a method on a null object reference

System.IndexOutOfRangeException – Occurs attempting to access an array element that does not exist

System.OutOfMemoryException – Occurs when the app runs out of memory

System.InvalidCastException – Occurs when you try to cast an object to a type that it can’t be cast to

System.InvalidOperationException - Occurs when a method call is invalid for the object's current state

System.ArgumentException - Occurs when one of the arguments provided to a method is not valid

In C# we can achieve this using the below techniques:

This is a very basic Exception handling technique in which try, catch, and finally, blocks are used.

try block: In this block the code is written which may cause the exception. If any exception is thrown then the corresponding catch block is executed.

catch block: In this block the exception is caught which means if an exception is thrown from the try block then we write the code to handle or log it.

finally block: In this block we write the certain code which we want to execute if an exception is thrown or not. For example: disposing of an object or closing the database connection. 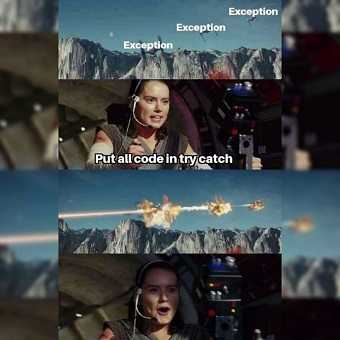 We can use the generic exception class as well to catch all types of exception in that case we have to write the catch block as below:

In C# 6.0 a new feature is introduced to handle the exception which is called the Exception Filters. This feature will allow you to handle more specific exceptions in catch blocks so that you can write the code specific to the exception condition.

Like before C# 6.0 We had to catch any exception and handle it. Now in C# 6.0, we can handle the exception specific to the condition.

An inner catch block will be executed in the above example because it is the first catch block that handles all exception types.

If there is not an inner catch block that matches with raised exception type, then the control will flow to the outer catch block until it finds an appropriate exception filter.

The throw keyword can only be used with the Exception object except for the catch block. It will be discussed in the next section.

Here is the point to note that if we follow the below approach to rethrow the exception then the proper stack trace will not be maintained means it will not point out that actually where the exception occurred it will show in the stack trace the line number from which the exception is rethrown.

Now if we follow the below approach then the proper stack trace will be maintained with maintaining the exact line number where the exception actually occurred.

C# exceptions are defined as classes, just like any other C# object. All exceptions are inherited from a base System.Exception class. There are many common exceptions that you can use within your own code.

Creating your own C# custom exceptions is helpful only when you are going to catch that specific type of exception and handle it differently.

It is considered a good practice to log all the exception which are coming into our application. The main benefit of logging exceptions that we can know exactly what are the conditions on which the code is failing instead of asking from the user that what inputs he has provided we can log all the required information and use that data to solve the error.

In many cases, we just ignore the catch block by writing nothing in it. There are some .NET libraries available for logging purposes like NLog, Serilog, etc.

We can log exception into the catch block. Every exception is coming into our application is crucial as they are critical to finding the problems in the code.

The first chance exception is mainly designed for debugging purposes. Like whenever an exception occurs it first goes to the debugger giving the first chance to you and then to the program/application. If that exception is unhandled in the program/application then it gets back to the debugger giving a second chance to you to do something with your code before and after the application itself decides to do.

It gives you visibility into every .NET exception being thrown.

You can also select the exceptions you want the debugger to break automatically in the above setting.

Hemant Manwani is a Software Engineer at LoginRadius who is interested in how the web works and developer tools that make working with web easier.